Register for our next webinar on how people feel about healthcare and insurance in the United States and why it mat… https://t.co/1eGZik5N9o Monday Feb 24 - 4:15pm

More than half of consumers are still “not at all likely” to eat at @BurgerKing in light of its removal of artifici… https://t.co/60Ik6tEaLJ Monday Feb 24 - 4:08pm

The great Fred Wilson from Union Square Ventures (no, we’re not kissing up to raise money) wrote a clever post on his blog lately about the differences in popular apps between Android and iOS users. The variances on the two platforms led him to contemplate how different their users must be. Then he put out his Bat Signal, asking for others to share data on the subject. Well Fred, here you go. 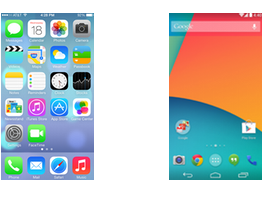 We’ve surveyed over 139,000 US smart-phone users about their preferred OS. 64,432 of these people use Android and 50,328 use iOS. The remainder use Windows, Blackberry, or something else. Respondents also answered various combinations of over 28,000 survey questions in our database. When our machines cross-tabulated all of those possible combinations, a number of correlations surfaced that most distinguish an Android user from an iOS user. Here is just a little of what we know:

There is a clear relationship between smartphone operating systems and age (as Fred presumed). Consumers aged 18-24 are 50% more likely to prefer Android.  And, while Android leads in every age category but those over age 55, it gets much closer in the 35-54 range. Women break fairly evenly on the question, while men are 15% more likely to choose Android over iOS. Black and Hispanic consumers both overwhelmingly prefer Android; the numbers are evenly split among Whites.

The biggest demographic indicator is household income; Android dominates among the least affluent consumers but the higher up the income spectrum you move, the more likely someone is to prefer iOS. People making over $150,000 in annual income are 66% more likely to choose iOS. This is the most common proxy characteristic we saw in the other correlations uncovered.

We should point out that there are NOT major distinctions between the two groups in terms of marital status (something that Fred Wilson wondered). Android users are slightly (<5%) less likely to be married but nothing noteworthy. Neither is there a strong correlation with parental status.

Demographics, however, tell only part of the story. We found a number of other correlations that Fred and others might find interesting (if completely trite).

Tall people love iOS. In fact, people who say they are much taller than most people their age and gender are a full 28% more likely to choose iOS over Android.

iOS users are tech savvy and charitable. They’re more than 5X more likely than Android users to have made charitable donations online ten times or more.

Android users have bigger health concerns. In fact, 40% of Android users say someone in their immediate family suffers from heart disease, compared to just 25% of iOS users.

There’s a lot more where that came from, Fred. But these were some of our favorites.

See what insights we have about your organization

Chat with someone from the CivicScience team and let us know how we can help you.

Sign up to receive a monthly recap from the blog